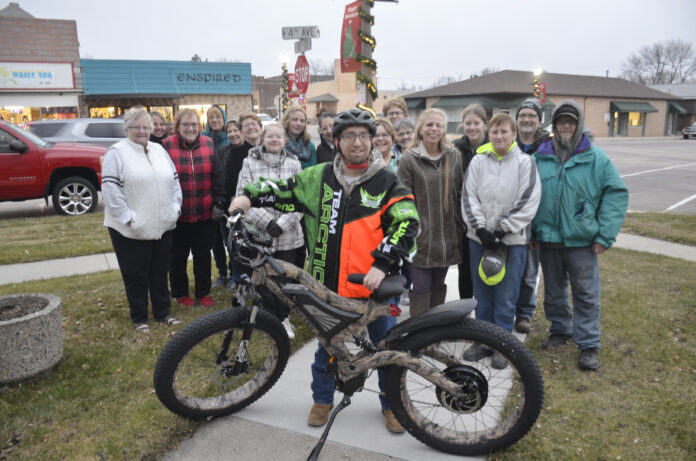 If you’ve lived in Windom for any amount of time, you may not recognize the name Nathan Wehmeyer, but you’ve no doubt seen him — on a bike.

Indeed, from early spring to late fall, it’s pretty hard not to see Nathan pedalling around the community. Aside from walking, his bike is his primary means of transportation around Windom.

For a number of years, he had a standard bike that he pedalled around the city, but less than six months ago he upgraded to an electric bicycle. Not only could he pedal the bike like any other two-wheeler, but it also was motorized which allowed him to travel without leg power.

If you saw Nathan on his new electric bicycle, you could also see the pride he had in his new purchase. He was moving about the community with ease. His mom, Darcy Hoffman, said Nathan put on over 1,000 miles in the first four months he had the electric bike. Not only does he use it for recreation, but it is his means of transportation to and from work at the Cottonwood County DAC, during three seasons of the year.

That all ended in the overnight hours of Nov. 6 and 7.

Just four months after purchasing the bike, it was stolen. Nathan, who lives in an apartment at Hillside Manor on 10th Street, parked and locked his bike outside his apartment window and thieves made off with the $1,300, fat-tired two wheeler leaving Nathan without his only mode of transportation.

Nathan did not have the extra money to replace it.

That’s when things began looking a lot like Christmas in Windom, thanks in part to local business owner Hilary Mathis. Mathis had seen Hoffman’s Facebook post that the bike had been stolen and that if anyone had seen it, to please let Hoffman know.

Hilary requested donations to replace Nathan’s bike and a chain lock. She hoped that maybe there would be enough donations — the goal was $1,500 — to be able to put a new bike in Nathan’s hands by Christmas.

What happened next restored Mathis’ faith in mankind.

“I’ve done things like this and I know that people are awesome. But what most surprised me was the number of people and who donated. I have friends from around the state that donated who don’t even know Nathan. It was surprising how many people I didn’t know who donated to it. There were a lot of those, too.”

But the story is far from over. Learn more about this early Christmas present in the Citizen’s annual Christmas Greetings edition in this week’s Citizen on newsstands tomorrow.