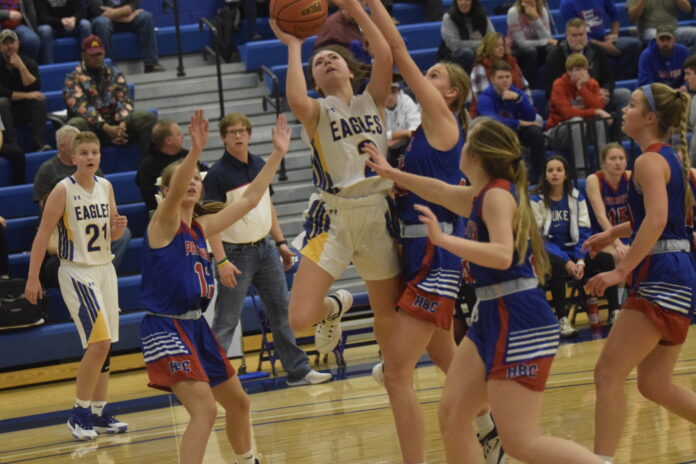 The Windom Eagle girls basketball team raced to an early lead, then held off a surge late to defeat Hills-Beaver Creek 60-49 Saturday during the Turkey Shootout, held at Minnesota West in Worthington.

After a slow start to the opening game of the season, the Eagle offense came to life behind freshman Hadley Sammons, who turned several steals into driving lay-ups in the first half.

Sammons scored 26 of the Eagles’ 34 first-half points, as Windom held an 11-point lead at the break.

In the second half, HBC mounted a comeback with a trio of three-pointers. But a trey by Sammons stemmed the tide. Then, late in the half, HBC had trimmed the Eagle lead to four points, but a key three-pointer from K.J. Huska and buckets from Sammons and Kameron Rupp helped the Eagles rebuild the lead back to 11.

Sammons, in her first varsity start, finished the game with 32 points and eight steals. Huska added 11 points and Tristyn Maras chipped in 10 points and 14 rebounds.

A slow-paced game Saturday morning saw Westbrook-Walnut Grove struggle from the field and misfire on a late chance to tie the game, as the Chargers lost 43-38 to Gibbon-Fairfax-Winthrop on the second day of the Wabasso Thanksgiving Showcase.

WWG saw its shooting percentage climb Saturday, but a deliberate offensive style by both teams limited the scoring chances in transition.

GFW held a three-point lead at halftime and was able to hold that three-point cushion much of the second half. Down the stretch, with GFW still leading by three, the Chargers came up empty on a three-point attempt to tie the game. GFW was able to preserve its lead late from the line, scoring its final six points from the stripe.

Westbrook-Walnut Grove got off to a cold start to the season from the field Friday afternoon, falling 47-40 to Wabasso on the opening day of the Wabasso Thanksgiving Showcase.

The Chargers were held to 20% shooting from the field for the game and couldn’t convert on several second-chance scoring opportunities. WWG yanked down 26 offensive rebounds, but had just nine second-chance points.

Isabel Klumper led the way for the Chargers with 19 points in the loss. Amelia Sickel added seven points.