Wolverines win in 2A opener; Chargers bow out 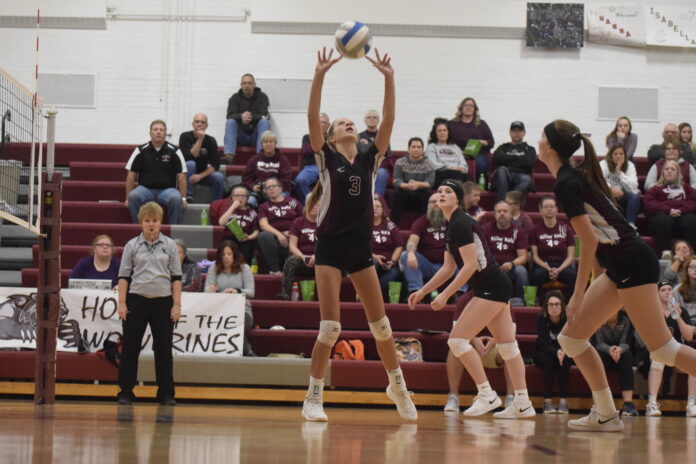 Mt. Lake Area-Comfrey didn’t earn many style points as it opened the Section 2A playoffs Monday night, but simply got the job done.

The Wolverines held off an early first-set charge, then jumped to commanding leads in the final two sets to earn a 3-0 sweep over 10th-seeded Mankato Loyola in Mt. Lake.

The first set went back and forth before the Wolverines went on a 5-0 run to take the lead. The Wolverines then countered every attempt by the Crusaders to climb back into the set.

In set two, the Wolverines raced to a quick 7-0 lead behind the serving of Jaci Tollefson. That gave MLAC a comfortable cushion, as the Wolverines spread the ball around and claimed a 25-19 victory.

Then, in set three, the Wolverines scored the final eight points of the set behind the serving of Michala Morin to close out the match 25-19.

Naas paced the Wolverines at the net with 13 kills, including four in the match-ending run. Morin added 11 kills.

Westbrook-Walnut Grove tried to rally from a two-set deficit Monday night, but the comeback bid ran out of gas.

Murray County Central won the deciding fifth set 15-11 as the ninth-seeded Rebels knocked eighth-seeded WWG out of the Section 3A playoffs with a 3-2 decision at Westbrook.

The Chargers then rallied to win set four 27-25. But MCC jumped to a quick lead in set five and never let go of it.

Natalie Wahl led WWG from the service line, going 19-of-19 with two aces.

Next matches: Check for updates after each match.
Windom: vs. Redwood Valley, Oct. 29
MLAC: at Cedar Mountain (Morgan), Oct. 28
RRC: vs. Edgerton (at Lamberton), Oct. 29