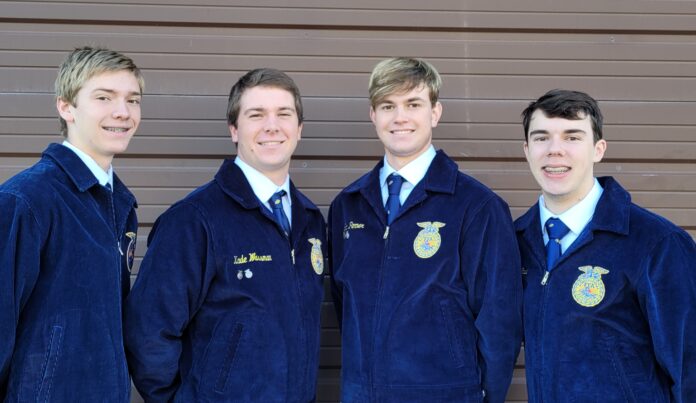 Mt. Lake FFA will be well-represented at the 2021 National FFA Convention & Expo, which begins tomorrow and runs through Saturday in Indianapolis, Ind.

The team earned the opportunity after clearing two preliminary hurdles. First, the team, which included Chad Suderman in the spring, finished first at the Minnesota FFA Convention in April. In a normal year, that would be enough to guarantee them the opportunity to compete at the national convention.

But not this year. Because of the ongoing COVID pandemic, national qualifying teams competed in a virtual preliminary contest Aug. 31 and Sept. 1. According to Darcy Dahna, a Mt. Lake FFA adviser who coached the team with Larry Christopher of Lakefield, the foursome had to complete part of the contest from their respective schools. The virtual contest included an agronomy exam, identification of crops and weeds, disorder and pest identification, and grain grading.

The top 17 teams from across the country in that competition advanced to the in-person competition that takes place Wednesday and Thursday.

For more on the competition, see the story in the Oct. 27 issue of the Cottonwood County Citizen on newsstands tomorrow.