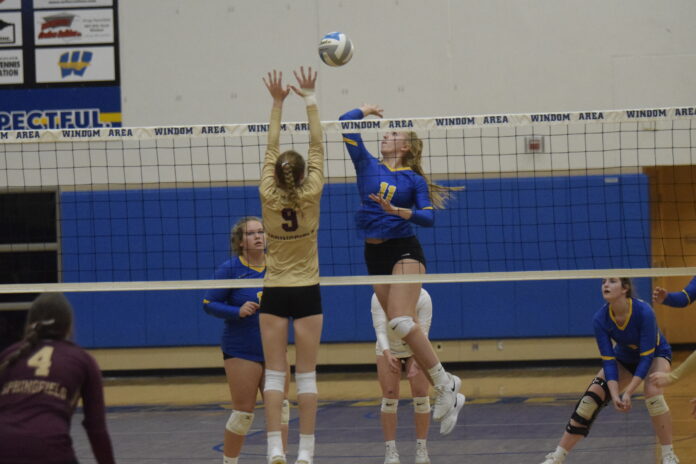 The Windom Eagle volleyball team ended its regular season on a three-match winning streak Monday night, claiming a 3-1 victory over Springfield at Windom.

The Eagles put together one of their more balanced matches of the season, with a strong night from the service line, at the net and in the back row.

Sydney Skarphol led the Eagles from the service line, going 21-of-24 with six aces. Jenna Veenker was 15-of-15 with three aces and Kendyl Sammons was 19-of-20 with two aces.

At the net, Tristyn Maras led a balanced attack with 17 kills. Skarphol and Amelia Rivera each added 11 kills.

Red Rock Central wrapped up runner-up honors in the Red Rock Conference Monday night, but it didn’t come easily, as the Falcons went back-and-forth with Westbrook-Walnut Grove before finally claiming a 3-2 win at Westbrook.

But in set five, the Falcons raced to an early lead and never looked back, winning 15-3.

Abby Wiggins was 14-of-14 serving to lead the Chargers. Addeson Jenniges finished with 29 set assists and Isabella Rentschler tallied 23 digs.