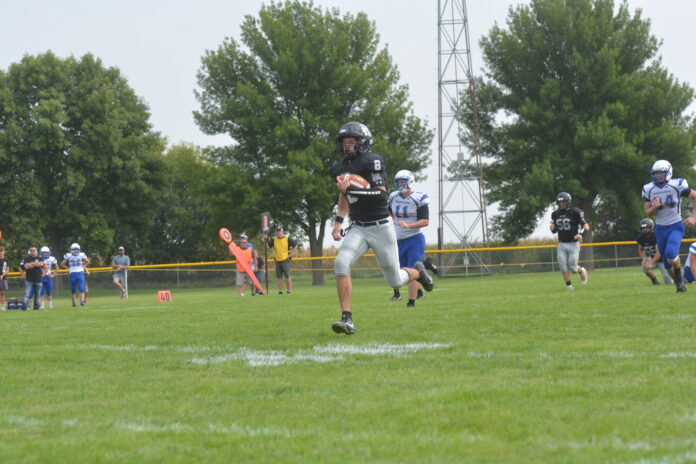 But Saturday afternoon, the Falcon offense was hitting on all cylinders, with senior Mason Strom shouldering the load in a 38-28 victory over Buffalo Lake-Hector-Stewart at Lamberton.

Strom had the game’s two biggest plays, scoring on runs of 62 and 76 yards. He finished the day with 238 yards on the ground, scoring four touchdowns.

Strom got the Falcons on the board halfway through the first quarter, scoring on a 2-yard touchdown run.

Then, after forcing a three-and-out, the Falcons quickly moved downfield, scoring late in the first quarter on a 17-yard pass from Isaac Simonson to Joseph Strock for a 12-0 lead.

BLHS bounced back, though. After RRC was stuffed on fourth-and-inches in its own territory, the Mustangs scored on a 5-yard Camden Kron touchdown run. Then, following a Falcon punt, BLHS took to the air, scoring on a 23-yard strike from Jaxon Watkins to Ashton Bergstrom. The two-point pass to Bergstrom gave the Mustangs a 14-12 lead.

But the Falcons answered with time running out in the half, as Simonson found Vander Mathiowetz alone in the corner of the end zone for a 20-yard touchdown and an 18-14 halftime lead.

BLHS regained the lead early in the third quarter, but the Falcons again answered, as Strom burst through tacklers and outraced the defense for a 62-yard touchdown run.

Late in the quarter, the Falcons recovered a fumble at the Mustang 25. Six plays later, Strom had his third touchdown of the day on a 2-yard run for a 30-22 lead.

The Falcons forced a three-and-out to start the fourth quarter, with Strom bursting free for a 76-yard touchdown run.

Strom finished the game with 28 carries for 238 yards and four touchdowns. Simonson completed 16-of-26 passes for 172 yards. Mathiowetz had four catches for 57 yards.