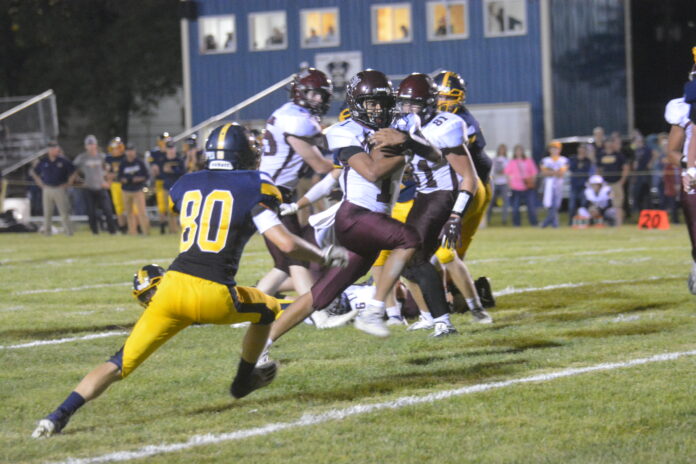 Maple River’s offense was solid but the defense was dominant Friday, as Maple River defeated the Windom Eagles 55-0 at Mapleton.

After a scoreless first quarter, Maple River erupted on offense in the second quarter, aided by a stalled-out Windom offense.

Maple River had five touchdowns in the third quarter as Windom had four three-and-out drives and one turnover in the period.

Maple River added a score in the third and two touchdowns in the fourth quarter.

Maple River held Windom to 7 yards of total offense for the game, with all of it on the ground. The Eagles did not complete a pass in the game.

The state’s top-ranked nine-man team in the opening poll, Mt. Lake Area, wore down Renville County West in the second half Friday night, pulling away for a 26-12 victory at Danube.

The Wolverines’ ball-control offense held the ball for all but three plays of the first quarter, with MLA cracking the scoring column on the quarter’s final play. Quarterback Marcos DeLeon hooked up with Alex Blom for a 22-yard touchdown pass. Kolby Kremmin’s extra-point kick gave the Wolverines a 7-0 lead.

RCW answered late in the first half, when quarterback A.J. Gasca called his own number for a 5-yard touchdown run. The two-point conversion failed, leaving MLA with a 7-6 lead at halftime.

In the second half, the Wolverine defense stuffed an RCW drive into MLA territory with a turnover on downs. On the next play, DeLeon hooked up with Kremmin on a tunnel screen, with Kremmin breaking two tackles and racing for a 64-yard touchdown. Kremmin’s extra-point kick gave the Wolverines a 14-6 lead.

But RCW answered on the ensuing kickoff, as Isaac Haen raced 90 yards down the sideline for a score. The two-point pass failed, leaving MLA with a 14-12 lead heading to the fourth quarter.

That’s when MLA’s line took command of the game, as the Wolverines churned out a nine-play, 62-yard drive, capped with a 3-yard touchdown run by DeLeon with 10:04 left on the clock. The PAT kick was blocked, leaving MLA with a 20-12 lead.

After forcing a three-and-out, the Wolverines marched 73 yards in 12 plays, capped with a 1-yard smash from Micah Holmberg. The two-point conversion failed, leaving the score 26-12.

RCW tried to move quickly into Wolverine territory with no time outs, but an incomplete pass as time ran out ended the game.

Westbrook-Walnut Grove was sharp on offense Friday night, jumping to a 20-0 halftime lead on its way to a 46-20 victory over Granada-Huntley-East Chain-Truman at Truman.

The Chargers scored in the first quarter on a 65-yard touchdown strike from Kole Curry to Cole VanDeWiele for a 6-0 lead.

Then, in the second quarter, Brady Ross hit Curry with a 20-yard touchdown strike. The two-point run gave WWG a 14-0 lead.

David Lee gave WWG a 20-0 halftime lead on his first touchdown of the night, scoring on a 3-yard run.

Lee tacked on touchdown runs of 10 and 1 yards in the third quarter, and Ross hit Dan Kleven with a 70-yard scoring strike, as WWG took a 40-6 lead.

The final Charger score came on a 40-yard pass from Orion Knakmuhs to VanDeWiele.