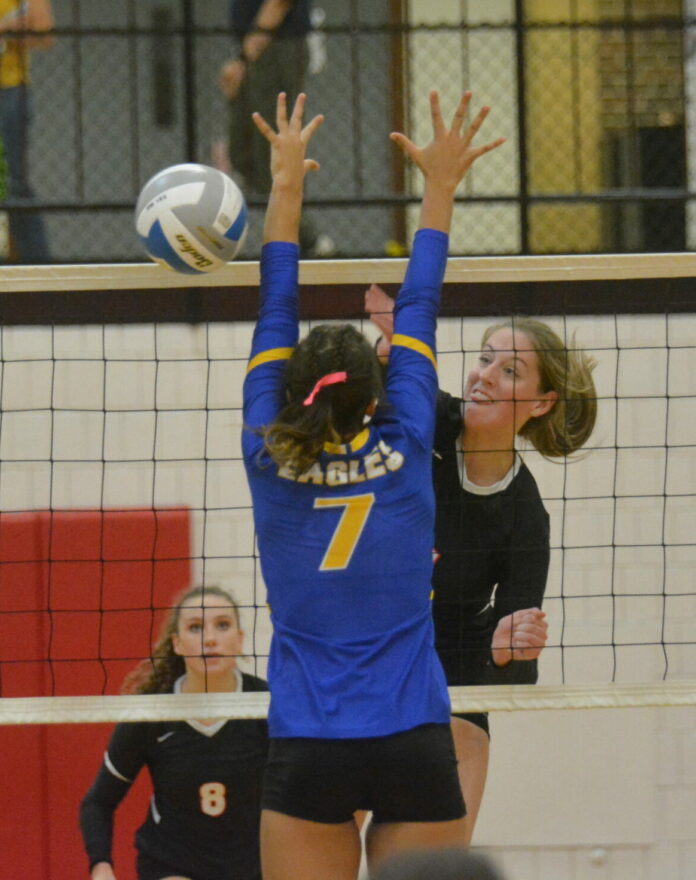 Red Rock Central and Windom traded punches much of the night Tuesday, but a series of big runs from the service line proved to be the difference for the Falcons, who claimed a 3-1 victory over the Eagles at Lamberton.

RRC used long service runs from Josie Horning and Karli Arkell to claim the first-set victory, but Windom battled back in the second set, with Tristyn Maras firing a string of ace serves and kills to eventually tie the match at one set each.

RRC rode the hot serving of Emily DeCock to the third set win. In set four, Windom held a 24-19 lead, but a string of points with DeCock at the service line lifted the Falcons to victory.

At the net, Arkell carried the load for the Falcons, finishing with 22 kills. Sondra Rindfleisch added five kills. Lilly Stavnes tallied 27 digs to lead the Falcons. Hemmingsen had 15 set assists.

Maras went 8-of-9 serving with six aces for the Eagles. Sydney Skarphol was 13-of-15 with an ace.

Edgerton’s height and experience at the net proved too much for Westbrook-Walnut Grove to overcome Tuesday night, as the Dutchmen defeated WWG 3-1 at Edgerton.

Edgerton cruised to the first set win before WWG battled its way back into the match. But Edgerton was able to put up a big block and force several Charger errors in the final two sets, securing the win.

Addeson Jenniges went 27-of-28 serving for WWG with four aces. She added 26 set assists in the loss.

The Clippers had MLAC on its heels defensively much of the night, as Cleveland recorded 16 ace serves as a team. The Wolverines were able to counter by forcing Cleveland into several hitting errors in the match. But late surges in both the first and third sets allowed Cleveland to record the victory.

Tollefson finished with 13 set assists. Baerg had a team-high 14 digs.

Next matches: Check for updates after each match.
Windom: at Worthington, Sept. 9
MLAC: at Sleepy Eye Tourney, Sept. 11
RRC: vs. Cedar Mountain (at Lamberton), Sept. 13
WWG: vs. Luverne (at Westbrook), Sept. 9