Skis shut down Pirates at state 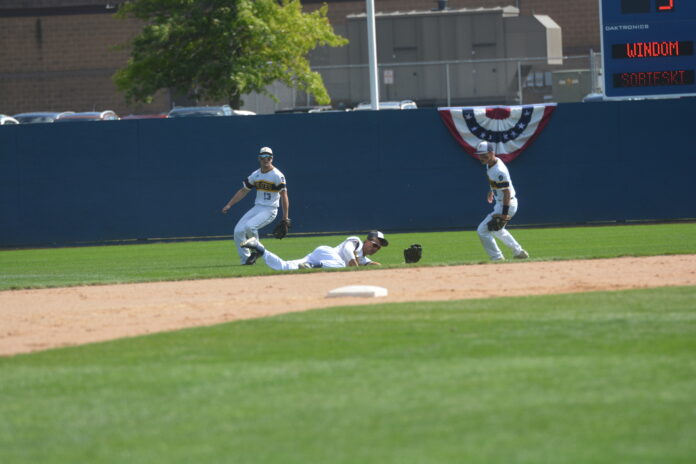 Strack held the Pirates to a single base hit, as Luke Gilbertson broke up the no-hit bid with a two-out single in the top of the eighth inning. Windom did not have a baserunner until Alex Fink drew a leadoff walk in the seventh inning.

Despite the lack of offense, the Pirates had chances to score in each of the final three innings, putting two runners on base in each frame. However, Strack coaxed a fly out and a pair of strikeouts to end the final three innings for the complete-game shutout win. Strack finished with four walks and struck out 17 Pirate batters.

Windom pitcher Collin Lovell was also sharp and had plenty of help from his defense. Sobieski mounted the game’s first scoring threat, loading the bases in the bottom of the second. But a comebacker to Lovell ended the threat.

In the third, a walk and an error gave the Skis runners on the corners with one out. But a botched squeeze bunt left baserunner Beau Hanowski out to dry between third base and home. Hanowski was tagged out and a fly-out ended the threat.

Sobieski had a batter hit by a pitch in the fourth, but that runner was thrown out by Pirate catcher Kyle Espenson, attempting to steal.

But Sobieski was able to break the scoreless deadlock in the bottom of the fifth, even after a baserunning blunder. With one out and runners on first and second, Lovell picked off the lead runner. But a walk and an error re-loaded the bases, and a wild pitch allowed the game’s first run to score.

Sobieski scored a crucial insurance run in the bottom of the eighth against Jackson draftee Ryan Rasche. A double and an error with one out put runners on the corners. Dusty Parker followed with an RBI single, giving the Skis a 2-0 lead.

In the top of the ninth, the Pirates again tried to mount a two-out rally. Kobe Lovell drew a walk and pinch hitter Devin Nielsen reached on an error. But Strack’s 17th strikeout ended the game and ended the Pirates’ season.

Windom ends the season with a record of 23-8.