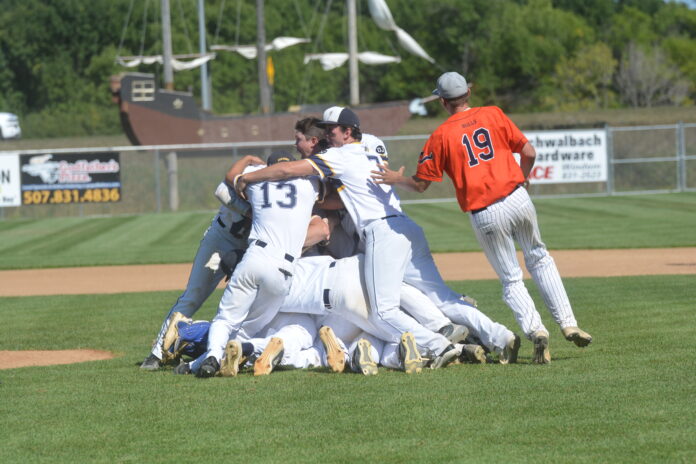 The Windom Pirates had a dazzling defensive performance Sunday afternoon and turned a Hadley error into the game’s only run, defeating Hadley 1-0 at Island Park in the Region 13C Third-Place series.

The win gave the Pirates the series victory two games to one and gave Windom a berth in the Class C State Tournament as the third seed out of the region.

Meanwhile, Gilbertson only struck out two Buttermakers, but got a big lift from his defense. Windom turned four ground ball double plays in the game, ending potential Hadley scoring threats.

After 7-1/2 scoreless innings, the Pirates finally broke through in the bottom of the eighth. Alex Fink and Kobe Lovell led off the inning with singles. After two outs, Gilbertson hit a chopper down the third base line, forcing a hurried throw that shorthopped the Hadley first baseman. The ball skipped in the air, allowing Fink to race home with the game’s only run.

In the top of the ninth, Hadley had a baserunner reach on a two-base error. But a line drive to Fink turned into the Pirates’ fifth double play of the game, ending the game and sending Windom to the state tournament.

Gilbertson earned the complete-game victory, scattering five hits and walking one while striking out two.