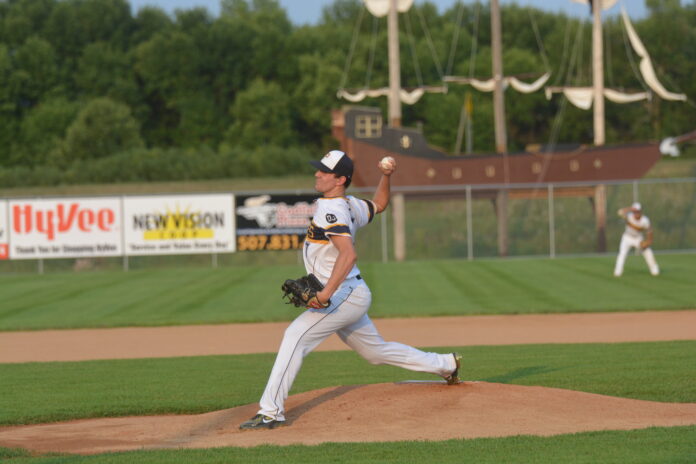 The Windom Pirates got off to a fast start at the plate and had a dominant pitching performance Wednesday night, opening the Region 13C Playoffs with a 4-0 victory over Pipestone at Island Park.

The Pirates scored three runs in the first two innings to take an early lead. That was plenty of support for pitcher Collin Lovell, who improved to 10-0 on the season with the complete-game win.

Lovell did not allow a baserunner until issuing a one-out walk in the top of the fifth. A bloop single to lead off the eighth inning gave broke up the no-hit bid for Lovell.

The Pirates took a quick lead against Pipestone ace Brandan Alfson in the bottom of the first. Alex Fink ripped a two-out double and scored on a line-drive single by Noah Kloss.

In the second, Conner Redman led off with a single, then advanced to third on an errant pickoff attempt. Kyle Espenson followed with an RBI single. With runners on first and second and two outs, Fink lined an RBI single up the middle, giving Windom a 3-0 lead.

The Pirates had several chances to blow the game open in the following innings, leaving runners in scoring position three times. But in the bottom of the eighth, Windom finally added an insurance run on a pinch-hit RBI single from Jacob Johnson.

Meanwhile, Lovell dominated the A’s lineup through the first seven innings. In the eighth, Carter Colemer broke up the no-hitter with a bloop single to right that fell just in front of the Pirates’ diving right fielder. Colemer eventually got to third base, but a strikeout ended the inning.

In the ninth, Mitchel Carson lined a one-out single to right and eventually advanced to third, but a groundout to third ended the game.

Espenson led the Pirates with three hits in the win. Brett Willaby, Fink and Redman had two hits each.

Lovell held the A’s to two hits and one walk while striking out 16 in the victory.

Windom took a 1-0 lead in the best-of-three series with the win. Game two will be played Friday in Pipestone, beginning at 7:30 p.m. Game three, if necessary, will be Sunday at Island Park, beginning at 2 p.m.