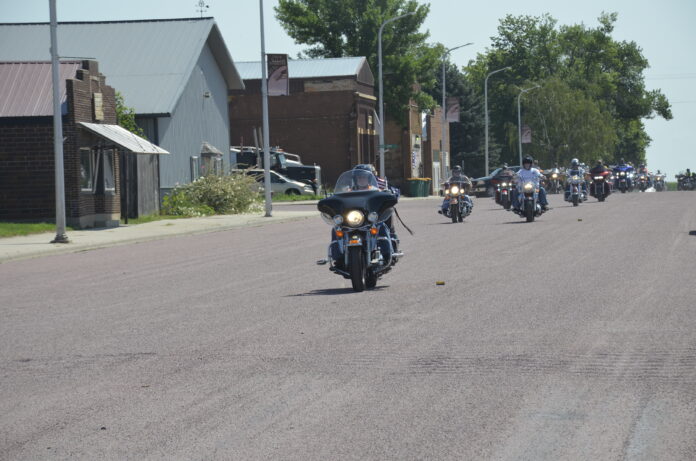 It’s not that often that 27 motorcycles rumble down Whited Street in Jeffers at 11 o’clock in the morning, but that’s what happened Saturday morning.

The cyclists were a part of Slayton Chapter American Legion Riders 64, which has been together for four years. This was the group’s second annual ride, which took them from their home base in Slayton to their first stop at Jeffers City Hall.

Sharon Evers of the Jeffers American Legion Auxiliary had bars and water available for the bikers.

“It’s been a good day, so far,” said Duane Mabon, director of the Slayton Chapter and the Second District American Legion Riders. “Last year we had a few more bikes.

“We appreciate the hospitality to allow us to stop here in Jeffers. Weather-wise, you can’t beat it.”

For more on why the bikers visited Jeffers, see the story in the July 28 issue of the Cottonwood County Citizen on newsstands tomorrow.