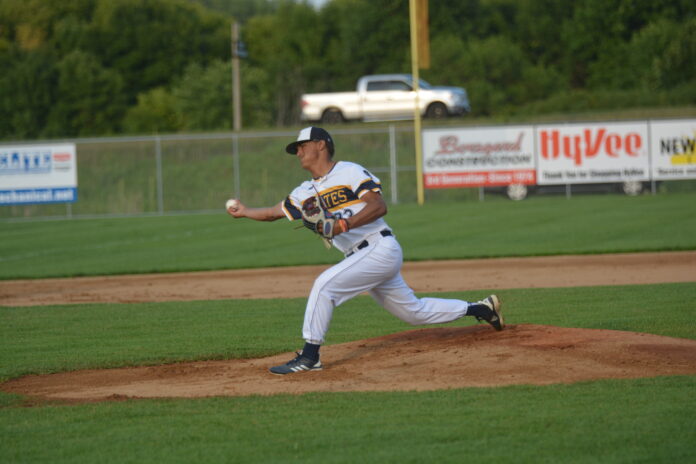 Both offenses were held in check much of the night, but the Windom Pirates capitalized on a timely hit and a costly Heron Lake error to claim a 4-2 victory in First Nite League action Wednesday at Island Park.

Pirate pitcher Luke Gilbertson did not allow a baserunner until the fifth inning, then was able to dodge a couple of golden scoring chances for the Lakers to keep Heron Lake off the scoreboard through the first seven innings.

Meanwhile, Laker pitcher Eli Fest was equally sharp, largely dodging a couple of Windom scoring chances. The Pirates had a mistake on the base paths cost them a potential run in the second inning, before finally breaking the scoreless tie in the bottom of the fifth. Kobe Lovell led off the inning with a pop-up that fell between three Laker players for a single. After a walk and a sacrifice bunt, Lovell scored on a wild pitch for the game’s first run.

Heron Lake tied the game in the top of the eighth on a sacrifice fly, but the Pirates took the lead for good in the bottom of the eighth. Noah Kloss was hit by a pitch and Luke Gilbertson drew a walk. With two outs, Conner Redman smashed an RBI double to the left-center gap, scoring Kloss with the go-ahead run. On the same play, the relay to try to throw Redman out at second sailed high and ran all the way to the fence past first base, allowing Gilbertson and Redman to both race home, giving Windom a 4-1 lead.

The Lakers scored a run in the top of the ninth and had the potential tying run at the plate, but a strikeout ended the game.

Lovell and Redman each had two hits in the win for Windom.

Gilbertson earned the complete-game victory, allowing two runs on six hits. He walked one and struck out four.

The Lakers took a 2-1 lead in the bottom of the first inning on back-to-back RBI singles from Peyton Engleking and Rhinley Kazuma.

But it was all Bulls after that, as Jackson scored three times in the fourth inning to take the lead for good. Jackson scored in every inning, including four-run innings in the sixth and eighth to put the game away.

Jahnke had three hits to lead the Lakers.

The Mt. Lake Lakers came from behind to pick up a 4-2 victory over Pipestone Tuesday night at St. James.

Pipestone scored single runs in the first and third innings before Mt. Lake’s offense came to life in the fifth. The Lakers scored on back-to-back RBI singles from Conner Jones and Peyton Engleking.

With the score tied in the bottom of the eighth, the Lakers took the lead when Trenton Renquist hit a sinking liner that skipped past the diving Pipestone center fielder for a two-run triple.

Jacob Brey came on to pitch the ninth inning for the Lakers, recording a key strikeout after Pipestone had brought the potential tying run to the plate. Brey picked up the save for the Lakers.

Next games: Check for updates after each game.
Windom: at Lakefield, July 16
Mt. Lake: at Tracy, July 17