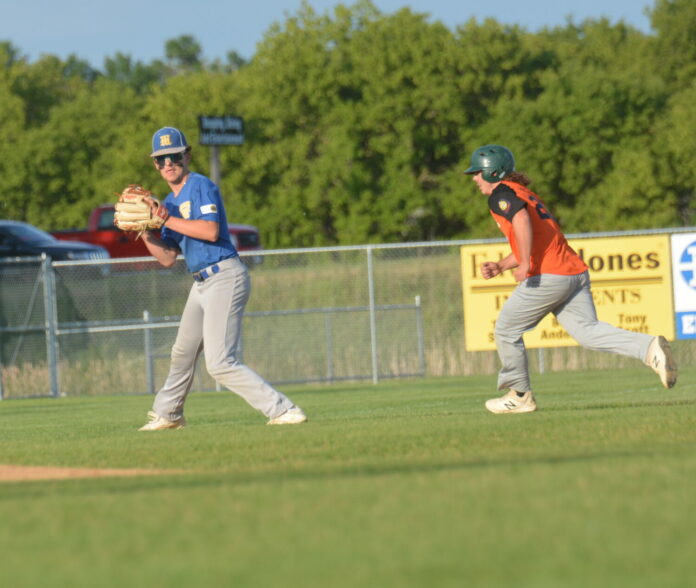 The Windom Legion Post 206 baseball team came from behind twice Thursday night, rallying for an 8-7 victory over Mt. Lake Area-Comfrey Post 389 in the Legion District 2B playoffs at Island Park.

MLAC started strong, taking an early lead. In the top of the first, Caleb Simon drew a bases-loaded walk and Devyn Rempel hit an RBI fielder’s choice for a 2-0 lead.

Windom got a run back in the bottom of the inning on a Brayden Kreofsky sacrifice fly.

MLAC padded the lead in the second, scoring two runs when Sam Stade reached on an error.

MLAC then stretched the lead to 6-1 in the fourth when Simon hit an RBI single and Stade scored on an error.

Windom battled back with two runs in the bottom of the fourth on back-to-back RBI singles from Brady Espenson and Wyatt Haugen. Josh Garrison’s RBI single in the fifth cut the deficit to 6-4.

In the bottom of the seventh, Windom tied the game at 6-6. A run scored on a throwing error and Haugen beat out an RBI infield single to tie the game. On the play, the potential winning run for Windom was thrown out at the plate, sending the game to extra innings.

MLAC regained the lead in the top of the seventh on a Tyler Dick RBI single.

In the bottom of the eighth, Cody Hockel led off with a walk, stole second and third and scored on a Zach Espenson groundout, tying the game at 7-7. Garrison then reached on an error with two outs and stole second and third. Kreofsky then hit a grounder to third. The throw pulled the first baseman off the bag, with Kreofsky sliding under the tag, allowing Garrison to score the winning run.

Garrison, Kreofsky and Haugen had two hits each in the win for Windom.

Sam Pidde, Landon Boldt and Simon had two hits each for MLAC.

Garrison earned the pitching win, working three innings of relief. He allowed one run on three hits, walked two and struck out four.

Dick took the loss for MLAC, working 1-2/3 innings of relief. He allowed four runs on four hits and a walk.

With the win, Windom advances to face Jackson today in the semifinals, beginning at 1 p.m., in Springfield.

MLAC will play an elimination game Saturday evening, beginning at 6 p.m., in Springfield, against the loser of the semifinal between Wabasso and Springfield.