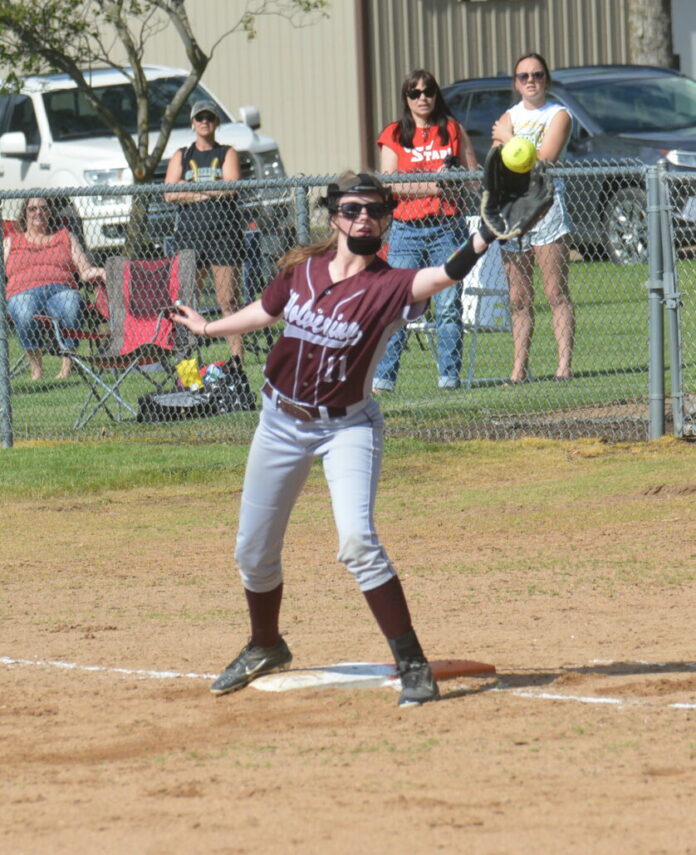 The Eagles took command of the game early. Trailing 1-0 in the top of the second, Windom sent 17 hitters to the plate, scoring 13 runs. Aubri Spielman had a pair of two-run singles in the inning. Jenna Brockman hit an RBI double, Elliot Espenson had a two-run single and Camryn Elness hit an RBI single in the inning.

RRC/WWG tried to chip away at the Eagles’ lead with a five-run third. Nicole Schroepfer launched a three-run home run, Beth Byers hit an RBI single and Nora Hemmingsen hit a sacrifice fly.

In the fourth, the Falcons pulled to within 13-10. Schroepfer hit a solo home run and Bianca Weis and Isabella Rentschler added RBI singles. Rentschler scored on the back end of a double steal.

The Eagles pushed the lead to 15-10 in the top of the sixth, scoring on an error and a double steal.

The Falcons were able to close to within 22-14 to finish the game, as Mercedes Myers hit an RBI double and Weis blasted a three-run home run.

Elness and Huska had three hits each for the Eagles. Spielman, Letcher and Kameron Rupp had two hits each.

Veenker picked up the pitching win for the Eagles, working the first four innings. She allowed 10 runs on five hits, walked three and struck out four.

Schroepfer took the loss for the Falcons, allowing 22 runs on 15 hits. She walked six and struck out three.

Sleepy Eye St. Mary’s did heavy damage at the plate Friday afternoon, rolling to a 14-1 victory over Mt. Lake Area-Comfrey at Comfrey.

The Knights blew open a 2-1 game in the top of the third, scoring five runs. St. Mary’s would add seven more runs over its final two at-bats to seal the win.

The Wolverines scored their only run in the bottom of the first without the benefit of a hit. Jaci Tollefson drew a leadoff walk, advanced on an error, stole third and scored on a wild pitch.