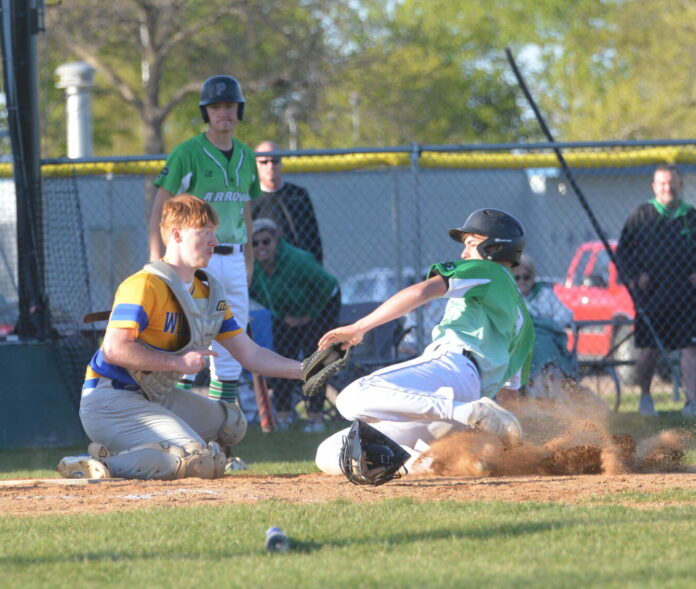 The Windom Eagle baseball team turned a gutsy pitching performance into a victory Tuesday at Island Park, rallying for a 3-2 win over Pipestone.

The Arrows took a 2-0 lead in the third inning, but the Eagles rallied in the bottom of the fifth. Conner Redman got the Eagles on the board with an RBI double and Kade Sammons followed with a two-run double, giving Windom the lead.

Starting pitcher Noah Armstrong kept the Arrows at bay, allowing six hits and three walks while striking out four. Armstrong got help from his defense in the top of the sixth. With a runner on second and one out, Pipestone hit a sacrifice fly to right field. The Eagles made an errant attempt to throw the runner out at third, but the runner was thrown out at the plate trying to score on the error.

Brayden Kreofsky retired the Arrows in order in the top of the seventh to earn a save.

The Falcons jumped to a quick 3-0 lead in the bottom of the first, scoring on an error and RBI singles from Dan Kleven and Cory Anderson.

Mason Irlbeck added an RBI single in the second for a 4-0 Falcon lead.

It stayed that way until the fifth, when pinch runner Joe Strock scored on a wild pitch and Orion Knakmuhs plated a run with a groundout.

MLAC scored its only run in the top of the sixth, as Sebastian Rehnelt laced an RBI single.

But the Falcons ended the game with five runs in the bottom of the sixth. RRC/WWG scored on an error, then Luke Willhite hit an RBI single. A pair of balks and an error ended the game.

Cole VanDeWiele had two hits for the Falcons in the win.

Kolby Kremmin had two hits for MLAC in the loss.

Irlbeck picked up the pitching win, allowing no runs on two hits in three innings. He struck out four.

Previous articleFalcons roll past Wolverines
Next articleCitizen Athlete of the Week, Delaney Smith