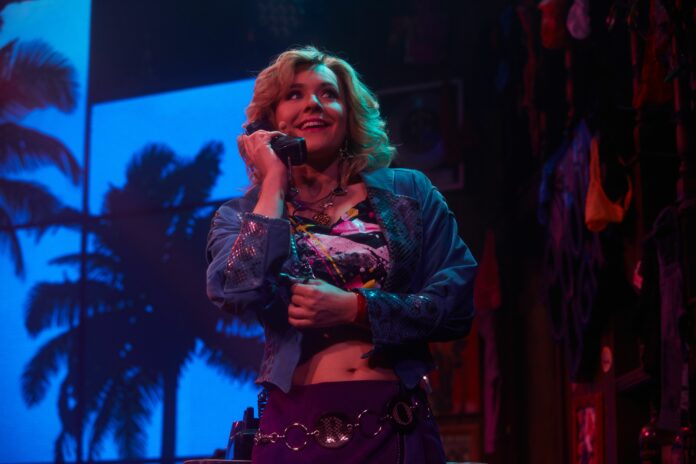 Imagine getting the job you always wanted and just five months into that job, your company shuts down and you’re out of a job.

There have been many who have experienced that exact scenario during the past year’s novel coronavirus pandemic — including Windom native Callie Syverson.

Syverson, who goes by the stage name Callandra Olivia, landed one of the key starring roles in “Rock of Ages” Hollywood, which delivered previews starting in October 2019 and officially opened in January 2020. Playing the role of Sherrie Christian, Olivia and a cast that included Tony Award nominee Nick Cordero and Broadway “Rock of Ages” alum Frankie Grande, enjoyed a wildly successful run in Hollywood before it fell victim to a pandemic lockdown in California.

“It was the most exhilarating, exciting time,” Olivia says. “I couldn’t have dreamt it if I tried. I remember in Mrs. Klosterbuer or Ms. Walen’s class (fourth or fifth grade) having to draw what a home looks like and I remember drawing a stage with a whole bunch of little stick people on it. So, I always felt like the stage was my home, but I couldn’t ever image basically leading a Broadway (musical) in LA on Hollywood Boulevard with wonderful people, like Nick Cordero.”

But now, with vaccinations ramping up, and states fully or cautiously reopening, Olivia and her fellow actors from coast to coast are getting back to work. For Olivia, that work has already started, but moves to presentation on April 24.

She and fellow “RoA Hollywood” stars Grande, Regina Levert and Matt Wolpe will take part in “Rock of Ages Live: All-Star Reunion Concert” from the real Bourbon Room Hollywood stage on which the “Rock of Ages” musical is based. She will be teaming with members of the cast that enjoyed a six-year run on Broadway from 2009 to 2015.

“The Broadway producers are putting on this one-night only, livestreamed concert,” Olivia explains. “It’s the concert, not the actual show, but what’s cool about that is they’re bringing most of the original Broadway cast leads together for this concert.”

She’s not only excited, but honored.

“What’s very special — and I feel very humbled — they didn’t ask very many people from the Hollywood cast to be a part of it, but they were kind enough to invite me to be a part of this,” Olivia says. “It’s really special to be involved in this because being next to some of these names is kind of crazy.”

But for those who never imagined making a trip to Los Angeles to watch the 29-year-old actress on stage, you now have the next best thing. The All-Star Reunion Concert will be livestreamed at 7 p.m. (Central Daylight Time) on April 24. However, you will need a ticket to have the opportunity to watch the concert.

To purchase your livestream ticket to Rock of Ages All-Star Reunion Concert, go to: https://www.stellartickets.com/o/rock-of-ages/events/rock-of-ages-live-all-star-reunion-concert?aff=oliviaroa

By clicking on that link, a portion of the ticket goes back to Callandra. If you’re watching as a family or group, you only need one ticket.

For more on her Olivia and what she’s been up to since the Pandemic started, see the story on the Faith & Family page in the April 14 issue of the Cottonwood County Citizen on newsstands today.