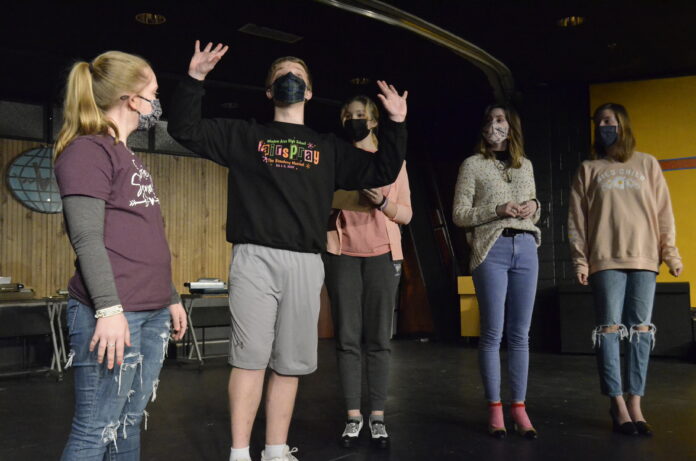 Windom Area High School’s fall musical production of “Newsies,” which was finally presented to cast members’ parents in mid-January, is still in editing and production for release to the public.

But that delay hasn’t caused a delay in local students staging another musical this school year.

Indeed, just a few days after giving the final presentation of “Newsies,” WAHS thespians went back to the stage to begin work on the “winter play.” And, believe it or not, the show will be staged before the calendar flips to spring on March 20.

In fact, there’s a possibility — although tentative at this point — that the show, with limited seating, could be opened to the general public when it’s presented March 11-13 in the WAMHS Lecture Hall Theater.

Rachel Axford and Joni Fischenich have tabbed “How to Succeed in Business Without Really Trying” as this year’s winter production for several reasons.

“We needed to do something that, A, we could put together in a five-week period, dividing an 11-week play into two different groups, and, B, something that we had most of the resources for,” Axford explains. “So, it should be one we’ve done before that I’ve already purchased most of the things, so we just have the rights (to the show) to buy.

“There’s also a distinct girls group and a distinct boys group, so we can practice with the guys after school and the girls in the evening.”

That helps with maintaining the social distancing and reduced numbers for rehearsals.

For more on the production, see the story in the March 3 issue of the Cottonwood County Citizen on newsstands now.